Having been badly bullied as a schoolboy, at 30 Ben Smith took on his mental demons and transformed his life through running. Now a full-time philanthropist and one of British Airways 100 Modern Britons, he uses his recovery to inspire and support others.

Ben Smith unfurls his six-foot-plus frame from his seat in a gastropub on Portishead Quay Marina, a stone’s throw from the flat where he lives with his husband-to-be, Kyle Waters. He’s wearing jeans with a T-shirt that reveals a large tattoo on his upper left arm. Still a work in progress, it will depict three birds, ranging from a small creature on a perch to a falcon in full flight. It represents his emotional journey over the past seven years, from a life of misery and secrecy to one of accomplishment, self-realisation and humanitarianism that has led to Smith being chosen as one of British Airways 100 Modern Britons in its centenary year.

Hearing Smith speak about his struggle to overcome the bullying that led to two suicide attempts in his teens, it’s hard to imagine he was ever anything but the confident, eloquent man he is today, famous for running 401 marathons in 401 days and raising £330,000 for U.K. charities Stonewall and Kidscape along the way. His warm personality and ability to put people instantly at ease shine through, but he insists it was only when he realized the importance of honesty and integrity that he was able to articulate his life story and be himself.

A Gift for Connecting

This extraordinary capacity to turn passion outwards and raise money for charity – including his own 401 Foundation – changed everything. Smith, 36, is promoting tolerance and positive change while also helping others to face their mental-health challenges. He’s given hundreds of talks at U.K. schools, companies and events and has found, often to his surprise, that people respond positively to him.

“I was terrified when I gave my first talk, to a room full of teenagers at a school in Battle, East Sussex,” he says. “They listened and clapped and a few of them cried, and I realised that this was my power – to get people to feel a resonance with what I’d been through, to talk openly about it, and give others the opportunity to do the same.”

What shone out for me was love

At the age of 29, Smith realized he needed to re-examine his life. He suffered a transient ischemic attack or “mini-stroke” at work. While outwardly he had the trappings of success – a well-paid job with an FTSE 100 company, a long-term girlfriend and a large house – he was miserable on the inside.

He had grown up in a loving family with parents who were both in the Royal Air Force, and got used to living in different places, but at age 10 he was sent to a boarding school. Softly spoken and sensitive, he became an easy target for bullies and changed from an easy-going child to a confused, nervous boy having nightmares.

Over the years things got worse: lots of kids were calling him “gay” – a word he hadn’t really heard before – and he was beaten up. At 18 he tried to cut his wrists before realizing he couldn’t go through with it.

“I’d spent eight years pushing down how I felt, shoving it into this pressure cooker, and that suicide attempt popped the lid,” he says.

Following a nervous breakdown, Smith saw a counsellor, then with private tutoring away from the school got his A-Levels and started university, only to feel overwhelmed once again. He overdosed on painkillers in what he says was more of a cry for help than a real effort to end his life, but the help didn’t come and he took to drink and drugs instead.

“I was numb to everything. I just succumbed to it and that’s how the rest of my twenties went.” Smith’s mini-stroke forced him to start the painful process of unravelling his life. The one thing that helped was his discovery of running. It was an unlikely catalyst, given that he weighed 230 pounds, smoked heavily and drank too much. A colleague dragged him along to a local running club in Bristol and after half-walking, half-running a couple of miles he went home with a fresh sense of accomplishment.

“While I was on a run I could think about things in a better way,” he explains. “Nothing else did that.” In 2013 he completed his first marathon in Brighton, but his personal life had come crashing down. He and his girlfriend had married and then separated, because Smith was coming to terms with being gay. He came out to his friends and family, who were surprised but totally accepting.

“Running gave me the confidence to accept who I was,” he says. “By 2014, I knew I wanted to raise money for anti-bullying charities, I knew I wanted an adventure and I knew it would be running-related.”

Smith heard about people who’d run 365 marathons on consecutive days and decided to round it up to 400, adding a victory lap. The 401 Challenge was born. He sold his home, signed up family, friends and Kyle as a support team and set off in a camper van his parents had bought him, emblazoned with the 401 Challenge logo.

With no corporate sponsors, Smith relied on donations and selling 401 merchandise along the way; all 23 pairs of trainers he wore throughout the marathons were donated. He contacted running clubs across the U.K. to request routes for his daily 26.2 miles, and they also found people for him to run with, which became a major part of his experience.

Running and chatting with 13,500 people all over Britain enabled him to connect with many personal stories and become more confident in telling his own. Smith tears up at the memory of the reception he got, from Glencoe to Birmingham to the London Marathon. “What shone out for me was love; I found nothing but love everywhere I went. I really believe we are a very emotionally connected country.

It felt like there was this string that ran around the U.K., connecting everyone

“We were joined by all colours, creeds, races, sexualities, ages – the oldest runner was 82 and the youngest was four. It felt like there was this string that ran around the U.K., connecting everyone – it’s the only way I can describe it.”

Part of Smith’s appeal on the 401 Challenge was that he always presented himself as just a “normal guy”. An elite marathon runner wouldn’t pause for fish and chips washed down by a pint of cider, but for Smith it was key to consuming the 6,500 calories he needed to run for 5 hours 21 minutes each day. Then there were the 101 talks he gave at schools during those 401 days, each a searingly honest account of the bullying he experienced and the conflict within himself. Equally tough was the pressure of reaching his fundraising target. The LGBT charity Stonewall “has done so much work over the years to allow me to be me,” he says. He also supports the anti-bullying charity Kidscape, which works to instil confidence in children. It was on the final day of his 401 Challenge, running right past his home in Portishead, that Smith was told by a news reporter that he’d surpassed his £250,000 target, prompting him to burst into tears on live TV.

By the end of the Challenge he was physically and mentally exhausted, but he dragged himself out of bed for the 2016 BBC Sports Personality of the Year ceremony. Somehow, he delivered an impressive speech as he accepted the Helen Rollason Award, for outstanding achievement in the face of adversity, ending with the words: “I’m not afraid any more.” 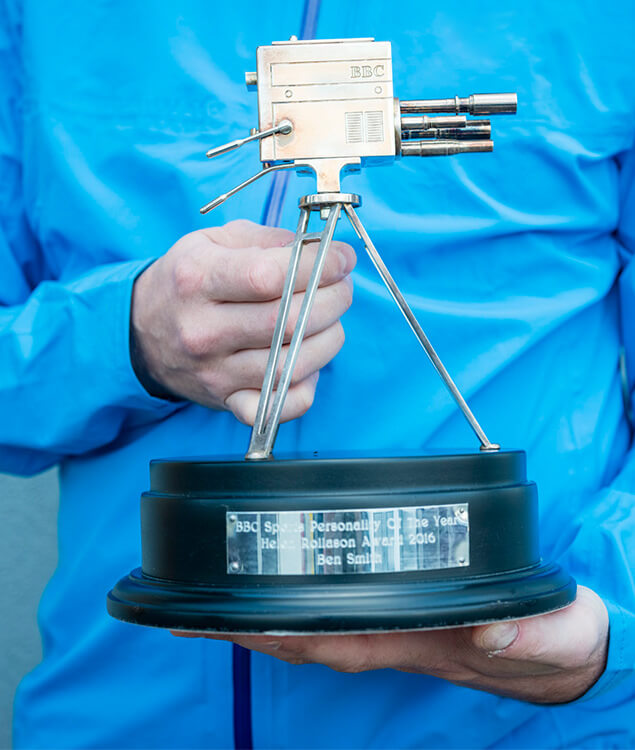 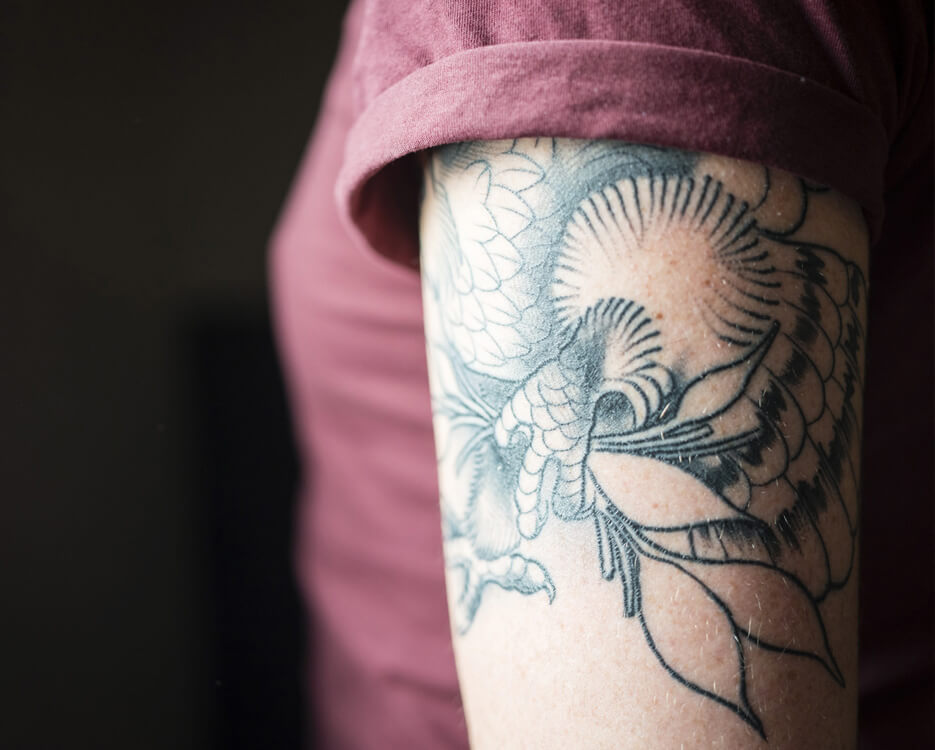 Smith's tattoo represents his emotional journey over the past seven years.

Now Smith makes a living from his public talks and by organizing running festivals. This year his 401 Foundation will make its first grants of up to £3,000 each to community projects tackling issues around mental health and self-development.

Smith’s life has been transformed, but knows his mental health battles aren’t over. “I feel more prepared to deal with the days where I’m depressed. I have the tools, and people around me who care,” he says. “I believe every single person suffers from a mental health issue of some kind. It’s just a sliding scale, and what we need to do now is get people to open up.”